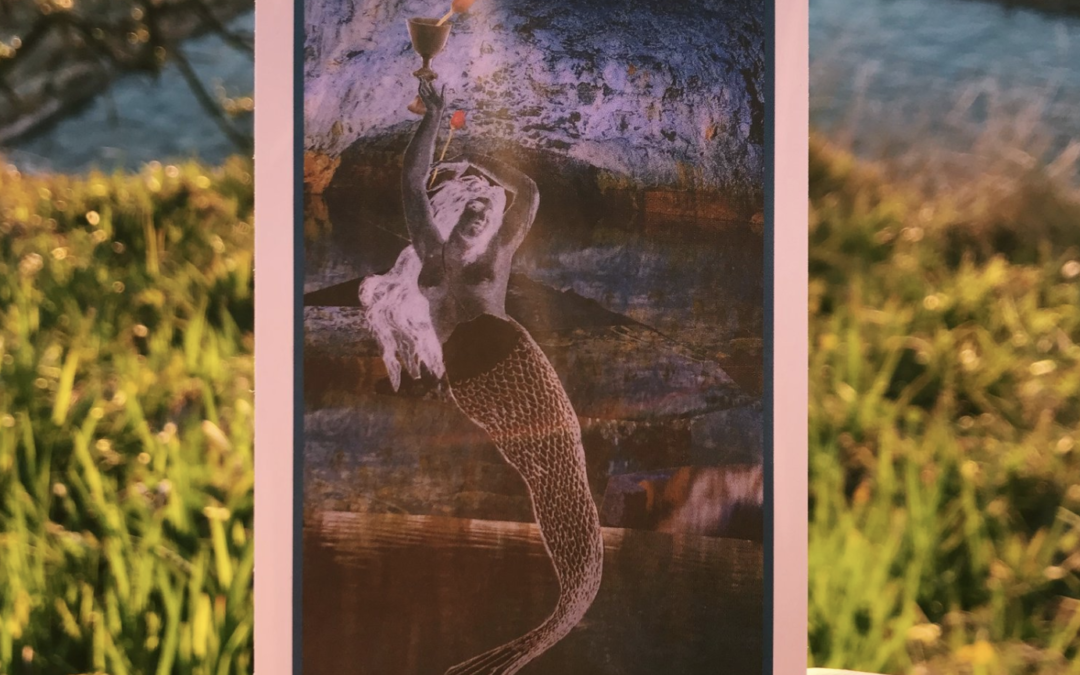 A very slippery fish from the beautiful Spolia Tarot.

It’s a bit of understatement to say that things have been quiet in Two Sides Tarot blogland this year. I’ve spent a lot of time over the past few months wrestling with ideas about what kind of content I want to make, what kind of content you might want to read, what would be useful and not just more noise in the increasingly bustling world of online tarot media.

I usually try to be accepting of ruts of all kinds, so I haven’t been too concerned about this round of unscratchable writing itches. Yes, I do really want to find ways to say new things about the tarot, and no, I can’t seem to manage that right now.

A few things fell into place for me over the weekend of the eclipse. I listened to an interview with Damien Echols, who described the way so much of Western magic is about symbols and images, rather than words, working on our subconscious minds. I’ve also been listening to a lot of my favourite Buddhist teacher, Pema Chodron (here’s one I currently recommend), and reading one of the ultimate spiritual mind melters, Zen Mind, Beginner’s Mind.

Of course, Damien Echols is right. Our subconscious minds do speak a language deeper and older than words, and all those Buddhist sages are right – such as there is a thing that is “right” – when they say that reality is so much more than the “small mind” way of perceiving things as fixed concepts, binaries, certainties. Reality is much more bendy than that.

We can analyse tarot card imagery and ideas with our left brains, we can describe and categorise what we see and what it means, but let’s not overlook the magic that happens when we turn a card over and our deeper selves, beyond the level of our rational awareness, receive a transmission of the image, the symbolism, the idea.

If you’re reading this, chances are you’ve turned over a card or two in your life, and I’m sure you’ve probably had that feeling when you first glimpse the image. That knowing. You know what it means, you know what it speaks to you, and yet, as soon as you try to capture it with words it slides through your fingers like the Page of Cups’ slippery fish.

Now, I make at least part of my living writing about tarot on the internet, so I’m not about to say that communicating about this art form is futile or shallow or pointless. Language is one of the most powerful tools we have to make sense of our world. Not to mention, I hope we’ve all been able to experience the solace and revelation that can come when a good tarot reader explains a card to us in the context of what we most long to know.

Talking about tarot connects us – readers to clients, scholars to students, passionate enthusiasts to each other – so let’s keep doing that. But also, let’s consider letting the sub-lingual transmission do the work sometimes.

Let’s inhabit that slippery space of subconscious awareness that traffics in sensation and symbol. Maybe sometimes it’s ok if your tarot reading is more like a dream you can’t quite describe, one that leaves an obscure feeling of sense-memory in its wake, trailing behind you like smoke as you go about your day.

During my eclipse magical working, I drew The Hermit. I don’t plan to say a word about it – to myself, or anyone else! I think, deep down, I know what it means.

Subscribe for the latest shop news, and receive your free guide to working with the High Priestess.

You have Successfully Subscribed!

Download your free guide to unlocking your inner High Priestess!

You have Successfully Subscribed!